By David Parker and Tim Aldridge 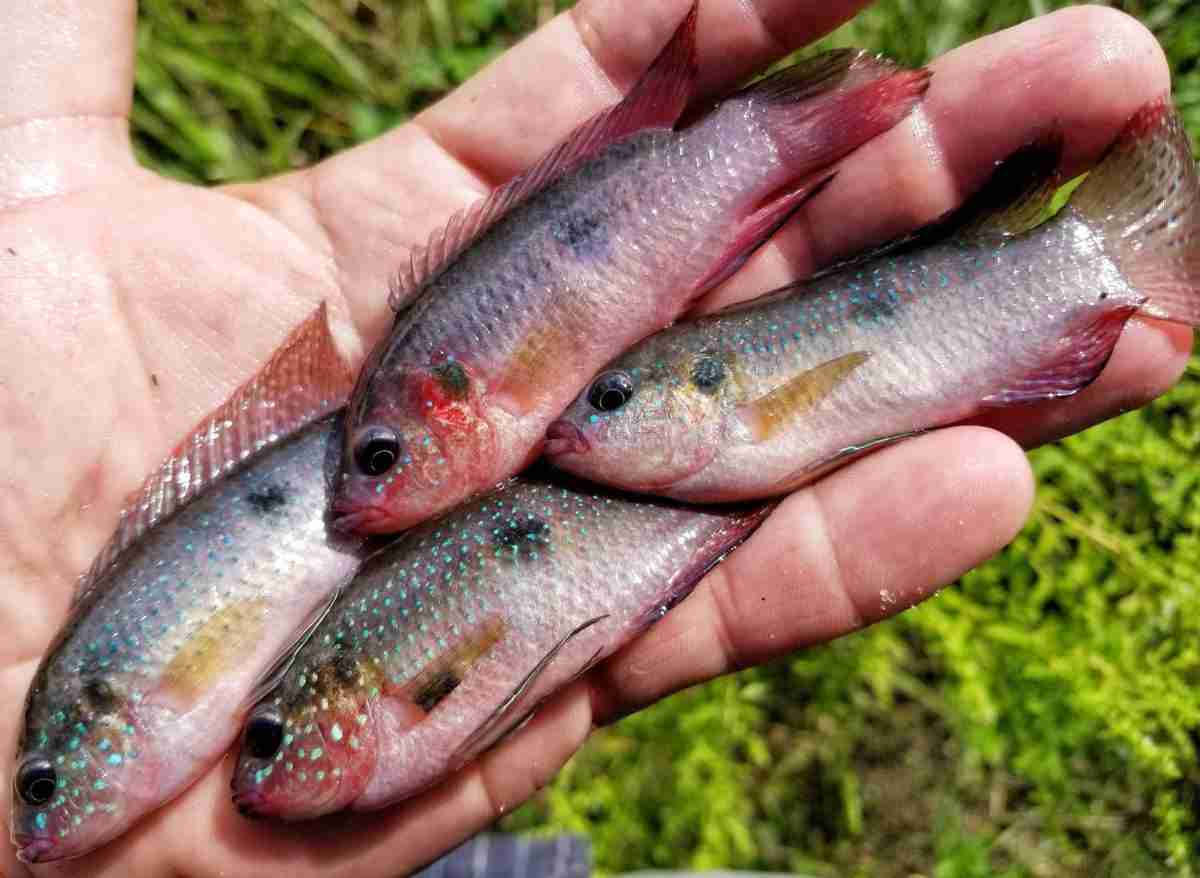 Of the thirteen currently recognized species of Jewel Fish/Cichlid (Hemichromis), there may be up to six pure species in Florida waters. Hybrids are very common in Florida; however, some pure populations do exist in the wild. We are hoping to clear some issues up, especially regarding identification of pure jewel cichlids vs. hybrid jewel cichlids. Our goal is to make accurate identification of pure species in the wilds of Florida, and how to separate them from hybrids. 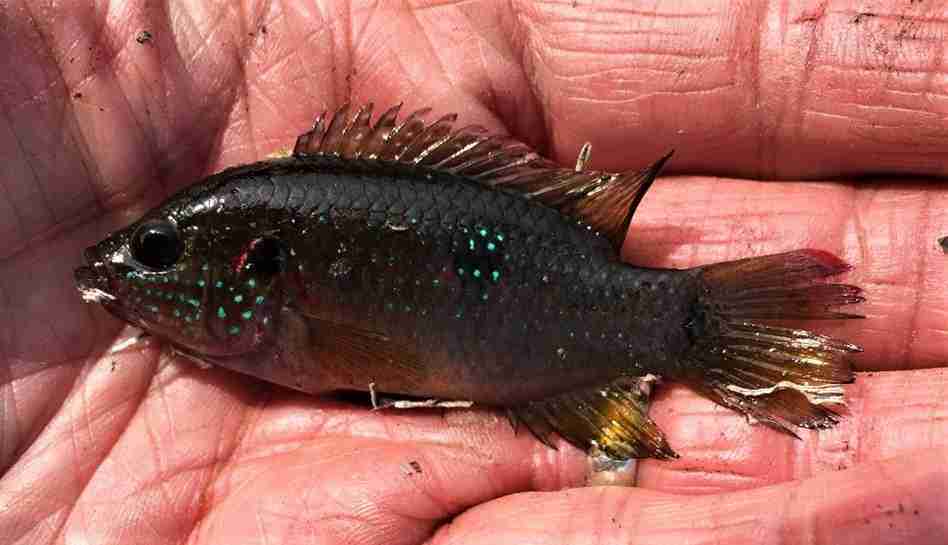 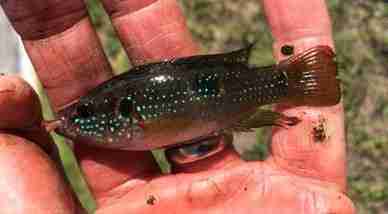 2-spot; second spot round and above lateral line. 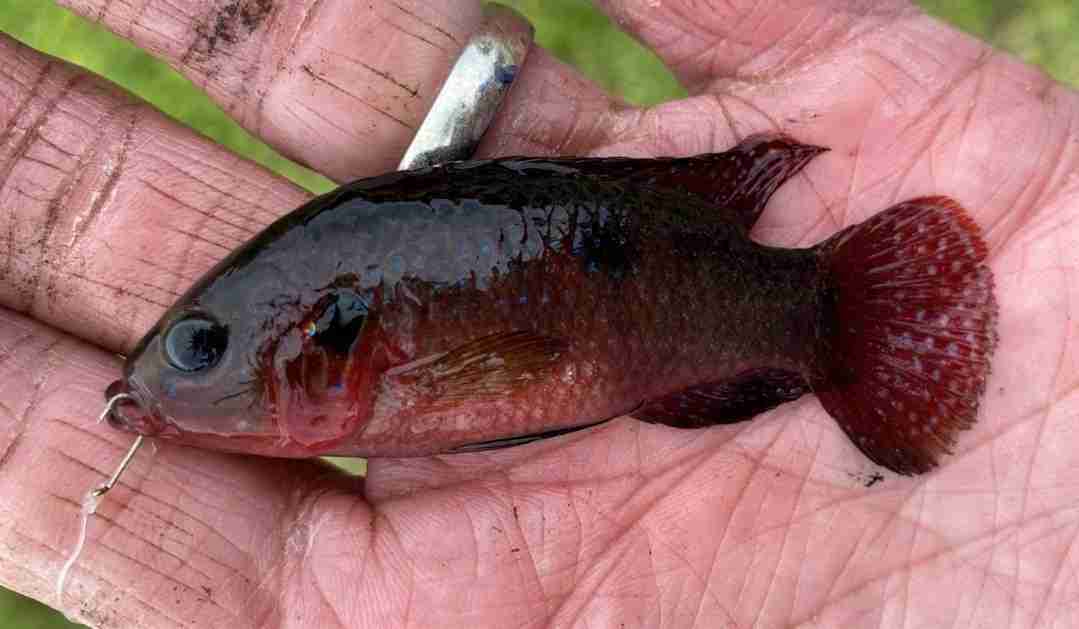 2-spot; middle spot round & large and sometimes bordered by light zone front and back, but not fully ocellated. Usually, 7-9 narrow dark bars on sides; orange-to-brown upper side, rosy-red lower side; iridescent turquoise edge or dot on scales; dark bar through eye running from nape to corner of mouth. 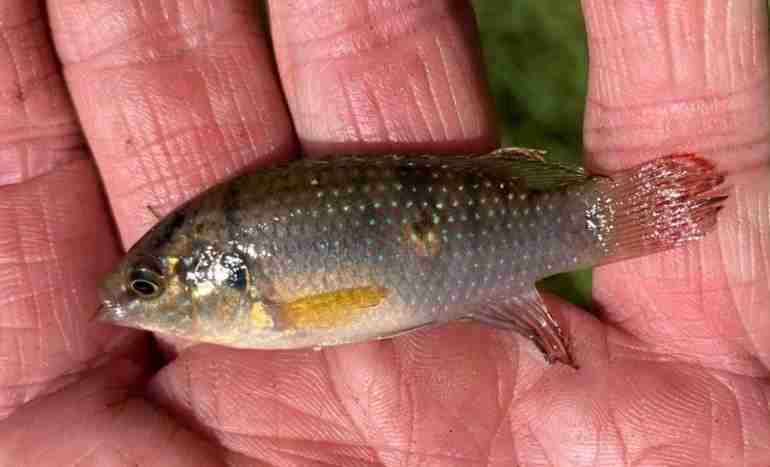 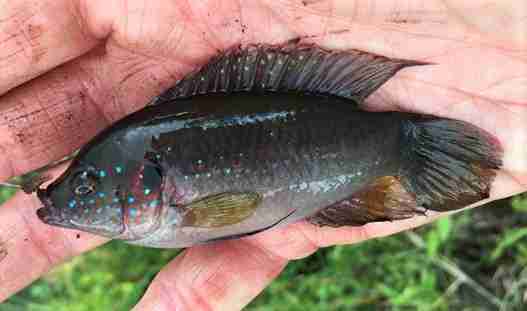 A story of Jewel Cichlids and Life-Listers in Florida:

In 1962, the state blanket identified every jewel cichlid in Florida as the African Jewelfish (Hemichromis bimaculatus). At the time, they were described only in south Florida. And at that time, it made perfect sense that it would be a Hemichromis bimaculatus, because prior to 1970s, that was one of only a few jewel species widely sold in the aquarium trade. That every jewel cichlid released from a tank in Florida were only one of the dozen or so jewel fish sold in the aquarium trade was a stretch, but that ID stood for about 30 years until the 1990s, when the state decided to say that 100% of the jewel cichlids in Florida that they said for over a quarter century were African Jewelfish, actually are and have always been Jewel Fish (Hemichromis letourneuxi).

Over that time, several other species of jewels rose in popularity in the aquarium trade, so it is no surprise that throughout the 30 years of documentation, there has been a succession of notes in the Florida state record like, “Species boundaries in the genus Hemichromis remain unclear,” [Stiassny et al. 2008] and for ID purposes, most importantly: “There is a lot of confusion about the scientific name for the species and it’s likely hybrid, so we treat it as an aquarium strain.” [sic, Goliad, 2018]. That one basically confirms in my mind that the state has not taken any interest or steps to qualify the speciation of jewel cichlids in Florida. They just picked one and resolved to treat them all the same for the purposes of invasive species management.

Then there is the study conducted in 2019 (“Genetic Characterization of Non-Native African Jewelfish, Hemichromis letourneuxi Sauvage 1880, in Florida:” Belfiore & Schofield), which confirmed even with a very small number of sampling sites that there are several genetic signatures across the state. They took jewelfish samples from 6 different areas (9 sites) across Florida to assess a theory that the entire state was populated from one release site in Miami. Although most of the samples genetically implied potential ongoing contact with each other, it “is likely these populations arose from other nearby introduced populations and experience ongoing gene flow among populations.

The exception is the Tampa Bay samples, most of which stand out as being distinct from all other samples. This population could have arisen from a separate, independent introduction event rather than the network of populations originating in Miami.” This was a very limited site study with a specific focus, and it still found evidence of genetically unique clades and suggestion of multiple release sites across the state.

I have fished and caught jewels from most of those 9 sites. And they are mostly populated with morphologically similar fish. I’ve caught jewels in well over a hundred additional spots in Florida and found vastly different morphology. And, anyone who has ever fished ditches or ponds in proximity to fish farms or exotic fish stores knows that they hold a bevy of species that are often isolated and not typical of the larger waters that were sampled in this study.

Given the history of not even properly identifying one species for over a quarter of a century, to me it is literally impossible to believe that of all the many jewel cichlid species that are popularly purchased as pets that only one species has ever been released into the wild in Florida. Likewise, I’ve noted from my own extensive fishing records that one set of species-specific traits dominate south Florida, a different one makes up most of my central Florida catches, and another predominates in the Tampa.

The fact that the waterways of south Florida do not connect to all those in central and west-central Florida also rules out the migration of the one species from So Florida (also noted in the 2019 study). Another field observation: in spots where I catch multiple species IDs, specimens of one species are always found located together, suggesting they recognize they’re different species, even if the state does not. SO….what I do is use the standard ID markers of the aquarium trade and ID them accordingly, when I catch them. And as a general statement, except for a few species that don’t tend to hybridize, I’m not sure ANY cichlid in Florida is a pure anything, which makes them no different from black bass in the southeast, and sunfish and shiners across the country.

Researching scientific journals and aquarium trade identification guides, here are the high-level morphology keys for the different jewelfish I’ve found in Florida (at least according to morphology):

So, with all that factual info, everyone must decide how they’re going to count jewels. Many folks just count them as one species, with many of them doing so because their Life List rules omit anything that isn’t an authoritatively recognized species. Many do what I do and apply the morphology and distribution literature in both scientific journals and the aquarist trade, to determine specific jewel species.

Like tilapia, and Midas/Red Devil cichlids, black bass, Sunfish, etc., it’s often not clear which species it is, and those get counted as hybrids or likely hybrids. And the issue is muddied further by the fact that many fish sold to aquarists are hybrids to begin with. But when there is a full set of morphological characteristics, we call them how they present. Some people are not warmly accepting of this or any other approach outside of their own personal Life List rules, but I find it the most logical approach for me.

If they catch any of the 7 Redeye Bass species, a Shoal Bass, a Spotted or Alabama Bass, a Choctaw or Guadalupe, or even a Smallmouth Bass in the south & southwest, it’s technically impossible to know if they’ve got a pure breed species without a genetic test. But with black bass, when it looks like a duck, and quacks like a duck, everyone calls it a duck. I take the same approach with cichlids.

So, everyone must apply their own lens and their own criteria. I will say that I’ve been told by critics of this approach that I’m just trying to make up species to drive my species count up. But the day I consider life-listing a contest is the day I stop life-listing. I keep records for myself only and have literally never told anyone my exact lifetime #s on any of my lists. I post yearly numbers and I like when others post their species counts because it’s inspiring to me and hopefully to others, and it’s also fun to cheer them on as they reach new milestones. But I just prefer to keep mine to myself, probably the competitive nature of my family that almost took the fun out of fishing when I was a kid, has something to do with it. I don’t know, but it’s everyone’s decision whether to share their numbers, and how they count their numbers. There are good arguments both ways, and I think both ways are perfectly legit.

Edward Johnson created The Art of Micro Fishing in 2019. The platform was created to provide a place for beginners and seasoned micro anglers to come together to learn and share. You can also join the group on Facebook.
Previous Top Ten Shiner Species Found in a Piedmont North Carolina “Shiner Heaven”

Micro Fishing The New with the Old