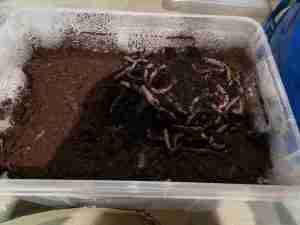 Running out to find the right worm species you want can sometimes be fruitless, and at the least a time-waster. There are several worms that can easily be kept and fed table scraps. Go out and find your preferred type of worms. Most of them will readily live and breed in a worm bin. Canadian Nightcrawlers are NOT one of the species that are easily kept and bred. Louisiana Pinks, Red Wigglers, and other similar worms are pretty easy to grow.

I use three Ikea tubs for my worm bins and only one lid. Pick a size depending on how much you fish. I also have aquariums I feed worms to so I use about a 5-gallon bin. They all nest into the other. The third just keeps it from leaking on the floor and keeps out unwanted pests. I keep it under the sink or in the basement. Drill 1/4 inch or so holes in the bottom of the microfishing worm bin. As an alternative to a lot of small holes a large hole can be cut and the bottom can be covered in plastic canvas from the craft department of the local department store.

The top bin uses a lid and has some holes throughout the bottom big enough for the worms to go through. The second plastic worm bin is just like the top one, except it has no lid. The two top bins sit in a third bin on the floor which has no lid or holes in the bottom.  The top bin doesn’t sit flush in the nest as it will sit on top of the old vegetable matter that has been turned into worm castings. When all worms are out of the bottom worm castings it can be emptied to let the three boxes nest into each other and sit flush. 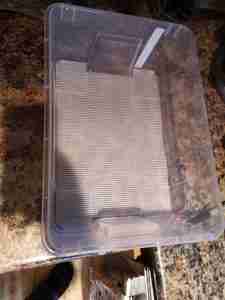 I put only vegetable matter in it along with newspaper or cardboard. Chop up the food scraps and drop it into the bin. I keep a small popsicle type stick in the top to cover the food scraps with soil and worm castings. It keeps and flies off it (but they aren’t a problem because the bin has a lid). Chopping up the table scraps helps worms break it down faster and reduces mold and spoiling. A cheap thrift store blender works well too.

Surprisingly, this type of worm bin doesn’t smell. If it smells there are food scraps that shouldn’t be used, like citrus, bread, meat, and cheese. Worms will make quick work of the scrap food from the kitchen but once a week feeding is likely enough for most sane fishermen.

For a fresh bin set up tear up some old newspaper into strips and loosely crumple it on the bottom of the worm bin tub. Add a few layers and spritz it with water or lightly pour enough water to get it wet. Add food scraps and some worms, and cover with more newspaper strips torn up and dampened. Cover the whole feeding bin with one folded piece of newspaper. Worms will largely stay under the layer of wet newspaper in the food. When its time to feed pick up the newspaper and up the food in and recover. When the newspaper gets too crumbly leave it and put a new piece on top. There’s no need to wet the second time.

Worms, however, can’t live in a dry environment and there must be sufficient moisture in the worm farm bin or they’ll die. If its too wet they’ll die. Holes in the bottom of the bin helps drain excess moisture. The solid bottom bin keeps it from leaking. The bottom bin can be emptied of fluid at any time. Water your pothos or philodendron with it.

New vegetable matter goes in the top to let the worms eat it. The top bin will eventually get full. When it gets full simply swap the bottom and top bins. I start putting newspaper and food in the newly empty top worm bin. Worms eat all the food in the bottom and start to inhabit the top. Worms leave the bottom bin when there’s no more food by going through the holes in the bottom of the top bin. Just repeat this cycle.

Edward Johnson created The Art of Micro Fishing in 2019. The platform was created to provide a place for beginners and seasoned micro anglers to come together to learn and share. You can also join the group on Facebook.
Previous Photo Tanks for Pictures of Your Microfishing Catches
Next 3 Tips for Catching Freshwater Sculpin at Night