Rocky River Watershed-Piedmont Region, North Carolina. This beautiful stream is a tributary of the Rocky River, although the Pee Dee watershed is very close by as well. 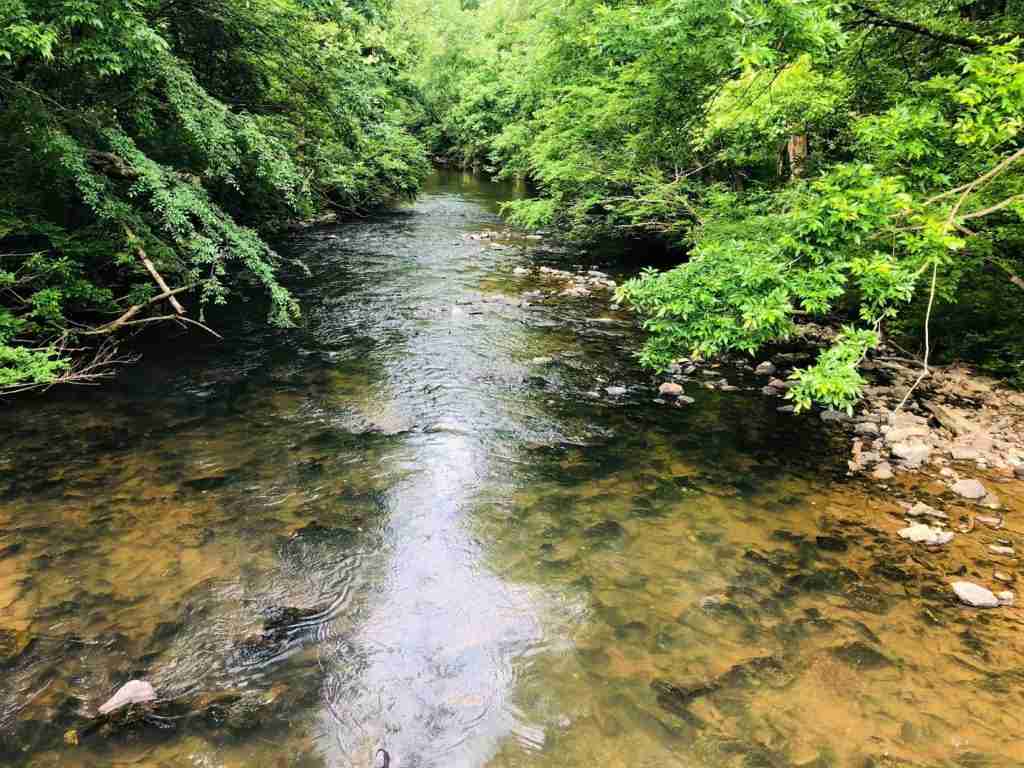 Minnow diversity is very high, with this section of stream producing twelve different Cyprinids that we have caught on the hook thus far. Black bass (Micropterus) are not present which helps keep minnow populations high, and the sunfish present are normally not very large-Green Sunfish (Lepomis cyanellus) and Redbreast Sunfish (Lepomis auratus). There are also two darter species and one madtom, and likely Eastern Creek Chubsuckers (Erimyzon oblongus),although we’ve not managed one on the hook in this stream so far. I call this place, “Shiner Heaven”, and regularly take visiting microanglers here to rack up on minnow species and visit a rather beautiful spot. (Note how Dom here is standing back in the shadows and using foliage and logs as concealment and cover from the school of fish in the hole (center of photo). Sneaking up on your quarry is a large part of microfishing in daylight. Never let your shadow cover the water and fish you are trying to catch. Keep the sun’s position in mind. Learning habitat is important as well for catching more fish-diversity wise, and learning fish identification goes hand in hand with microfishing as minute details can lead to a new or desired species) (Observe how Dom’s shadow “isn’t” on the riffle and hole where he is microfishing? Also, a very, very important point is always cast into the riffle ahead of where your target fish are and let your bait flow naturally into the hole which typically in streams this size will hold the most diversity and number of fish. In this case, Dom cast well ahead to his upper left where the spot of sunlight hits the water and let his bait drift to where his line is in the photo)

Common to abundant and the largest minnow in this stream, Bluehead Chubs are usually found in deeper holes with some cover, being either rock, log, or sunken roots on shorelines. Under the bridge is almost a guaranteed spot in the spring and summer for spawning males with bright blue heads and tubercles that are rough to the touch. We typically try to avoid catching Bluehead Chubs as their rubbery mouths make extracting micro hooks challenging and for the sheer number of them occupying this tributary. To around 7 to possibly 8 inches in length. A rarity for this stream and watershed, Rosyside Dace are present however, but not in great numbers. We’ve caught them in deeper pools with some flow and around holes under tree roots in slack water, but never that many in this stream. They seem to have a fondness for swimming over gravel and small rocks, and often intermingle with schools of other minnow species. Males are more aggressive while microfishing and more colorful, working in favor of everyone involved, minus the fish perhaps…A notable identification feature is the red “slash” mark behind the head and gills, along with the fine, “dace-like” scales and large, oblique mouth and snout. Rosyside Dace can reach a little over 3 inches. A stunning and very fast cyprinella (diamond scales) shiner that is common in pools, runs and sometimes riffles of this stream, normally around some current, but not always. Always willing to take a hook, we find them most often in the very center of streams in the main flow, sometimes up to three feet deep. Males are breathtaking in season, with beautiful fin tips and a multi-colored dorsal. Scales are diamond shaped and rather large, not rounded as in minnows in the genus notropis. Satinfin Shiners can be confused with the next species below, however, Satinfin Shiners are thicker and not so elongated in appearance. To over 3 inches in length. 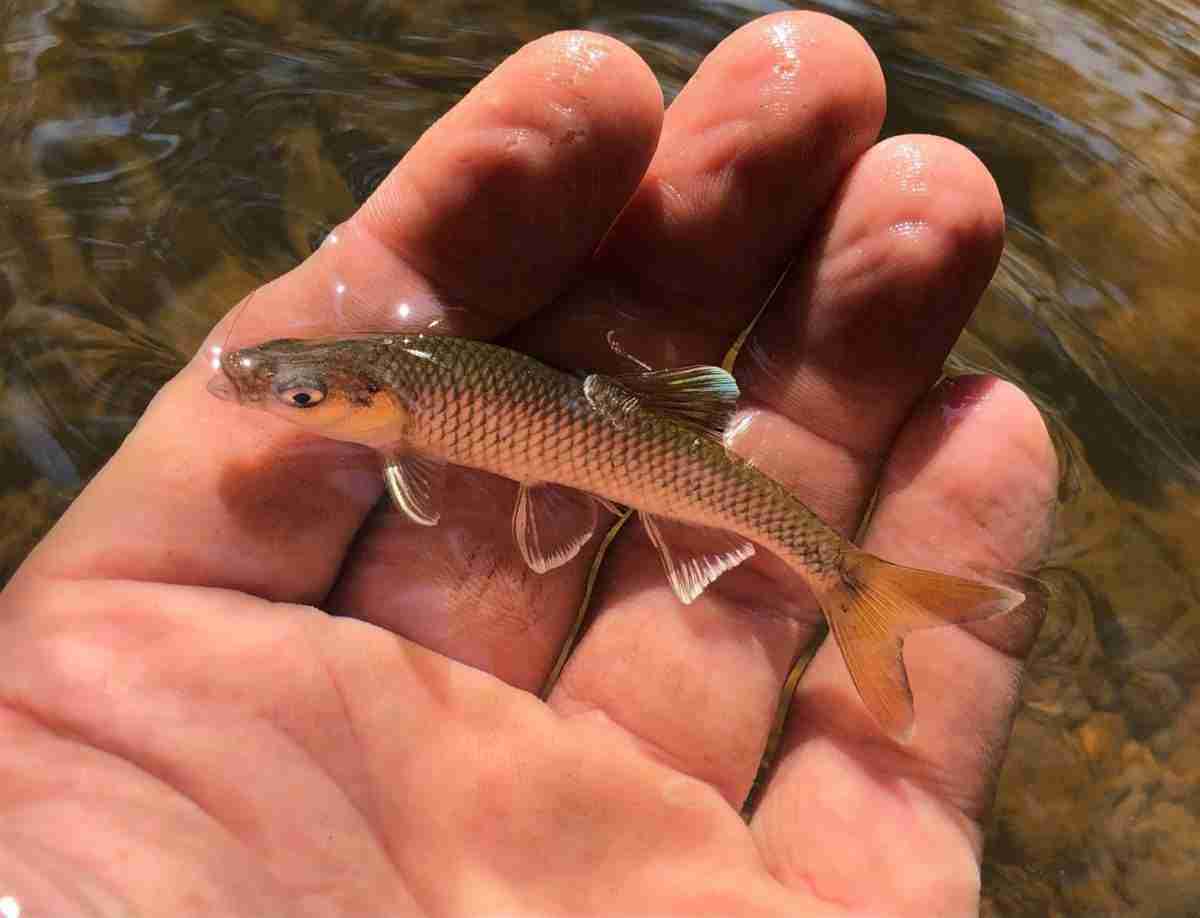 Seemingly a larger, longer, and more humpbacked version of a satinfin shiner, Whitefin Shiners are often found alongside Satinfins in schools in many streams within their range, however, Whitefin Shiners are normally not so common. In our experience, Satinfin Shiners are 3:1 to Whitefin Shiners in streams where they both reside. Some larger examples have an overhanging upper snout, but this is not always a valid feature found on all Whitefins. Look for the elongated form, never robust and thick like the Satinfin Shiner, except for a pronounced hump after the head and before the origin of the dorsal fin. As with all the satinfin shiners, look for the two, dark, pigmentation marks on the dorsal fin, as only cyprinella shiners have this feature. Whitefin Shiners also grow much larger and can reach more than 6 inches in length. The largest notropis shiner in this tributary, Spottail Shiners are common to abundant and put up a great but short, spectacular fight on a ten-footer. Genetic work may need to be done with this southern example and its northern relative, both now considered the same species, yet have very different physical features and may indeed be separate. The black, caudal spot isn’t often the best identification feature, as some populations simply don’t exhibit one at all. A large eye, elongated form, and subterminal mouth are the best identification traits in our opinion. To over five inches in length, Spottail Shiners can be found in current in deeper pools, slow runs, and typically, school with other larger minnow species here. 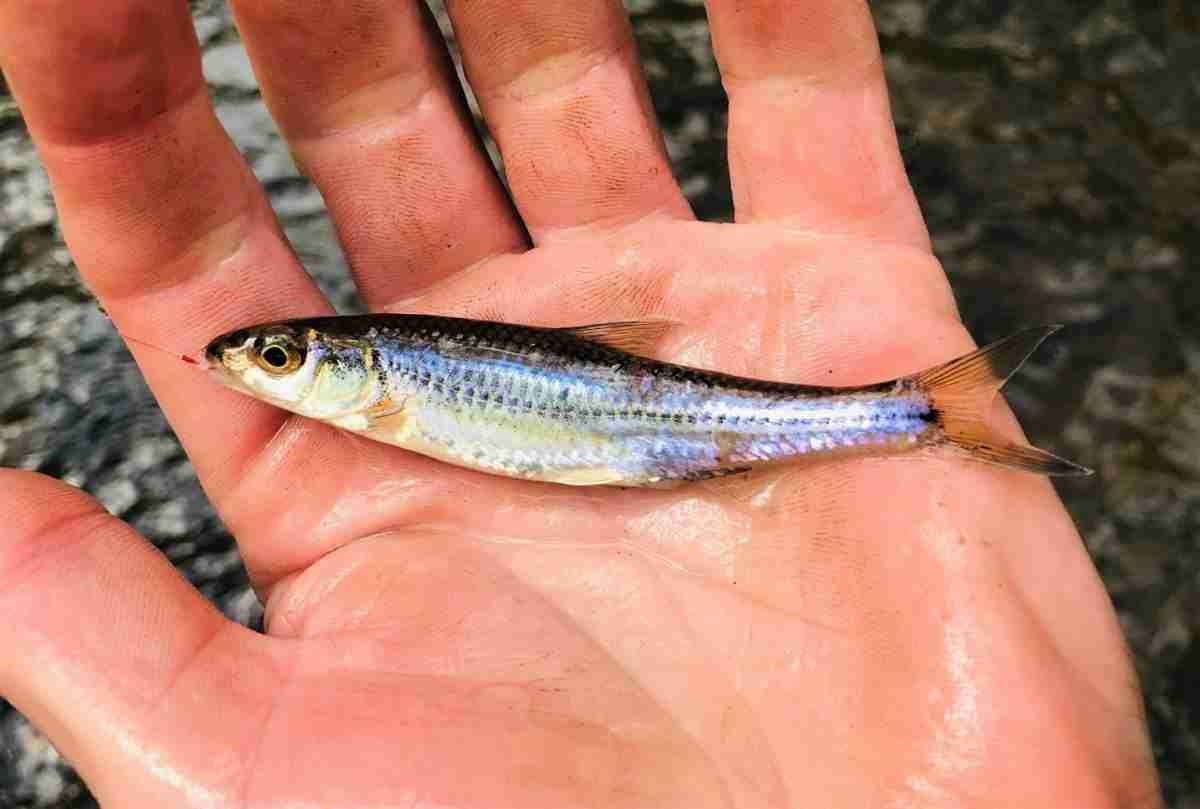 Another larger, notropis minnow that can be confusing to identify, the Sandbar Shiner is fond of current and particularly, current around bends with large rocks in streams. Exhibiting a large, round eye and a large, terminal mouth with black pigment on the lips, Sandbar Shiners also have a significant dip of the lateral line below the silver stripe along the sides. There may or may not be a small wedge like mark at the caudal fin base. Sandbar Shiners are common to abundant and can reach over 3 ½ inches in length. They are a very aggressive minnow and once you find one of them, you may have to catch a lot to find more diversity. 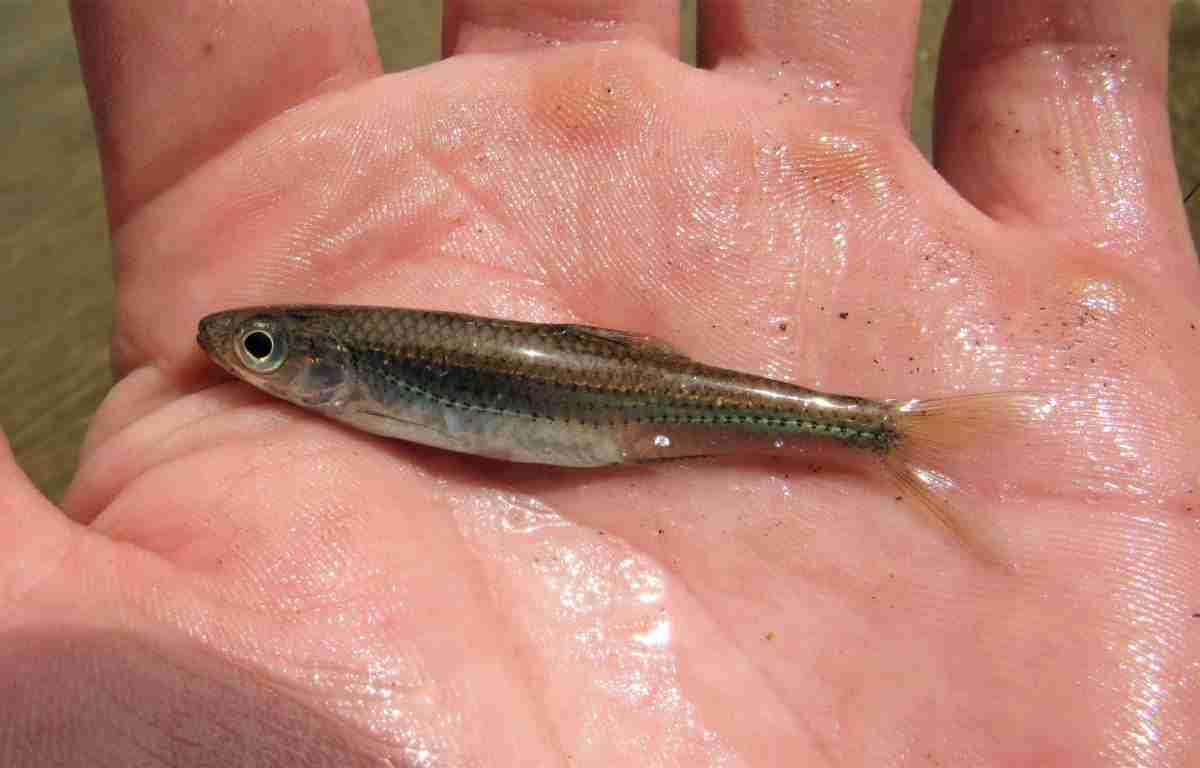 Slim, fast, and streamlined, Comely Shiners are a fan of deeper holes and pools with current. They are often mixed in with various notropis and cyprinella minnows in schools, but Comely Shiners do swim into runs as well to escape predators coming from deeper water. Comely Shiners have a hint of blue on the scales along the sides from behind the head to the caudal fin base. They can be confused with Sandbar and Spottail Shiners, although, Comely Shiners have a much smaller eye. To over 3 ½ inches in length. Common to abundant, however in this tributary in the Rocky River watershed, there are no records of Comely Shiners, leading us to wonder how they got where they are. Overall, Comely Shiners tend to look a little more elegant than other notropis minnows. Coastal Shiners are typically found along the southeastern United States along the coastal plain but some managed to make it to our stream in the North Carolina Piedmont region. Coastal Shiners are an identification nightmare, as individuals in the same school can look drastically different. In some populations, they appear to have hues of blue and silver along the side, in some others, reddish coloration. Snout shape varies as well, and this species most definitely needs to be studied and researched more. We’ve managed two Coastal Shiners from this tributary, habitat was a pool in the main current over sand, mixed in with other notropis minnows. Coastal Shiners can reach over 3 ½ inches in length and are normally common to abundant where they are found. 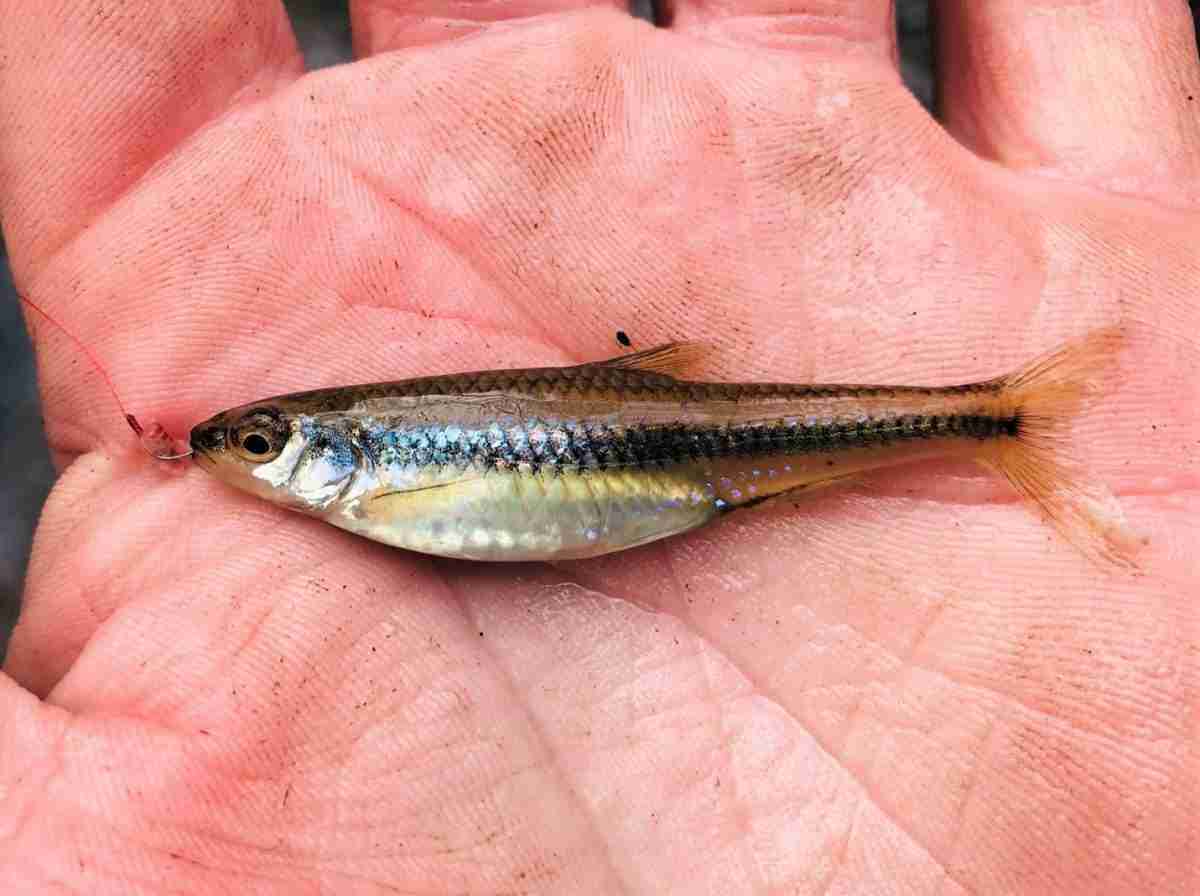 Edward Johnson created The Art of Micro Fishing in 2019. The platform was created to provide a place for beginners and seasoned micro anglers to come together to learn and share. You can also join the group on Facebook.
Previous Micro Fishing The New with the Old
Next African Jewelfish Micro Fishing Identification Guide for the Colorful Florida Invasive Cichlids

Micro Fishing The New with the Old