Enneacanthus obesus, or the Banded Sunfish, is a mysterious small Sunfish that ranges along the east coast of the United States. Normally they are found in coastal plain waters. In my years of fishing, collecting, and micro fishing I had never even encountered one. I was beginning to doubt they existed.

One afternoon in the Spring of 2018 my friend Scott Smith called me up about going on a trip to eastern North Carolina. A small group of collectors were going to find some fish species. He advised me that I was the only micro fisherman in the group, which was fine with me. Scott did not inform me much about the species we would be after but I assumed it would be normal North Carolina Coastal Plain fish species. 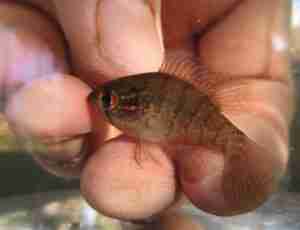 The three-hour drive east from Charlotte was pleasant enough and I got to the group’s meeting
location ahead of everyone else, right after dawn. It was a small motley crew of collectors ranging from ages 20-75 and I was surprised to see my mentor Fred Rhode there, which is always a pleasant surprise.

The meeting place was a shallow, tannic water pond in the middle of nowhere in a swamp preserve. The closest big city was Wilmington, North Carolina. I was quick to grab my fishing backpack and extend my ten-foot telescopic pole and hit the water first. If you are a microfisherman with a group of people using nets, you must strike first.

After a group comes through with a net, the water is muddy, murky, and pretty much a waste of time to fish in. Fish are wary if they are still there at all, and you have to resort to waiting for a number of hours for things to return to normal.

I went to work around the edges of the pond where the shade and vegetation were. With my polarized glasses, I could easily see small Sunfish charging out from underneath cover at my bait. They were tiny Banded Sunfish, no larger than a dime in size. I caught a few of these dime-sized Bandeds and snapped some photos. They weren’t colored or banded up much, so I moved on to an area with underwater structure to try.

I put a larger piece of red worm on the small size 30 hook and went to work in a corner of the pond with a sunken tree limb. I was able to snatch up two beautiful and quite larger Banded Sunfish from the sunken tree limb. They were absolutely gorgeous. I had a small crowd gather around as I snapped fish-in-hand photos of the two beauties. I got them back into the pond after however, right in time for the rest of the group to start netting.

Nets were able to pull up some beautiful Banded Sunfish, one was a little larger than the largest I had caught. It hiding under the big sunken tree branch that I had caught two from earlier. 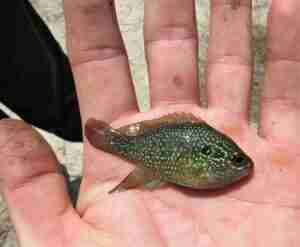 For the better part of the next half hour, I went to the unspoiled parts of the pond to take photos and also see what else I could micro fish. I was able to catch some beautiful Lined Topminnows (Fundulus lineolatus), both male and female.

Afterward, the group met at the parking lot, and Fred or who we call Fritz informed me that there was a black water creek down the road worth checking out. I was intrigued and agreed to follow them there to check it out.

The creek was no more than five minutes down the road and was tannic to black water. It was slow but flowing. I immediately caught some beautiful larger Dollar Sunfish (Lepomis marginatus).

My friend and one of my best fishing buddies, then Nick Viole but now Dr. Nick Viole, joined me at the small roadside creek.

I noticed a small school of what appeared to be Gambusia, just off the shore in the current, barely under the water. Something didn’t look right, however, so I investigated by dropping a bait right in front of them, letting it go naturally with the current to appear as natural as possible.

It worked like a charm and I pulled up my first Ironcolor Shiner (Notropis chalybaeus). The Ironcolor Shiner was a species that I had been chasing for a while now. I was so very happy to finally see one in person. They were smaller than most species of Notropis, with a solid black stripe going laterally down the side of the body and black on the inside of the lips. 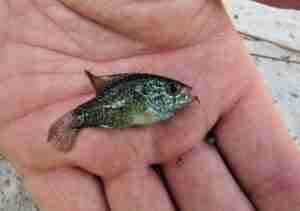 Dr. Nick was able to pull up a couple as well and I took decent photos of the ones I caught before release. Fritz and Scott were able to pull up some with the seine net and also some Dusky Shiners (Notropis cummingsae).

It had been a good day and the group decided to go their separate ways around an hour before sundown. I had pictures to look through and arrange so I headed home to work on that.

It’s always nice checking off new species, and Banded Sunfish and Ironcolor Shiner were two that I had really wanted to see and catch.

I haven’t been back to the pond since then, I’ve heard rumors from good sources that’s it’s been dried up, and have also heard that the Banded Sunfish aren’t there anymore, but replaced with Bluespotted Sunfish (Enneacanthus glorious).

The very latest rumor was that the pond was back to normal and full of Banded Sunfish. That is the way I would like it to remain. It was such a small, quiet, and serene spot in the middle of nowhere, perfect.