The Mud Sunfish is both unique and uncommon, making it a top contender for the Super Sunfish
Grand Slam. I had never seen one, not in thirty-five years and not in the past three years of
collecting and microfishing. 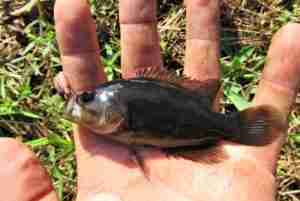 One of my best buddies in the fish world kept assuring me that I would find one when I least expected it, and he was correct. Dustin Smith of the North American Native Fish Association (NANFA) taught me to look deep under detritus and heavy aquatic vegetation, even in the shallowest of waters, swamps, and backwaters of the Carolina Coastal Plain.

Mud Sunfish are in the Genus Acantharchus and are the only member of the Sunfish Family to have cycloid scales, meaning smooth to the touch. The entire remaining Sunfish Family has ctenoid scales, which are rough to the touch. One issue with Mud Sunfish, and perhaps one of the reasons they seem to be uncommon, is misidentification with the similar-looking Warmouth (Lepomis gulosus).

Warmouth are a completely different species however and tend to occupy deeper water
and typically hold to structure or cover. If ever in doubt as to which species you have, rub your hands across the fish laterally, Warmouth scales are rough and Mud Sunfish scales are smooth. 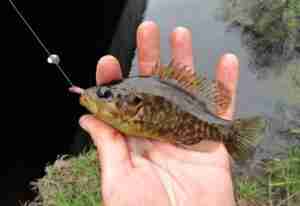 With all of this in the back of my head, I drove to eastern North Carolina one hot August morning to scout out locations for the Pinewoods Darter (Etheostoma mariae). This Darter was the second to last Darter species in that area that I hadn’t caught on hook and line, and finding a suitable place to microfish or snorkelfish for it was becoming a challenge.

When I pulled up to this latest location, I was disappointed before I got out of the car. It was deep and gnarly looking with black water and would obviously not work for snorkel fishing. I decided to try to fish it anyway, since I was already there and it looked good for Sunfish and Bullheads, maybe a Dusky Shiner or two. 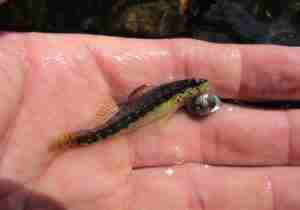 I threw out a circle hook bottom rig with a nightcrawler chunk into the deepest section of the creek, under the bridge itself in the darkest water. I caught a couple of nice looking Warmouth almost immediately. I made sure to take a second look at the Warmouth, feeling the rough scales as I ran my hand across its scales, but they were officially Warmouth!

I tried a little micro fishing near the shoreline, but the creek dropped off steeply into deep water and there was nothing I could see. I did notice a shallow cove that was covered by a grassy area, with no more than two inches of murky, muddy water. I dropped a big
chunk of nightcrawler near the opening that I could barely see under the grass, and I saw what
appeared to be movement. I pulled up quickly and I had caught my first Mud Sunfish! I could not believe it because the water was so shallow, but that is where they were.

I did the hand rub test and the result was in fact, smooth scales! I snapped some photos of the peculiar-looking Sunfish and let it back, but not in the same location in the grassy hole, I had a feeling there would be more than one in there.

My partner dropped her bait in the same location and pulled out her first Mud Sunfish as well.
After we pulled the two out and snapped photos, we were very content with the morning’s fishing. I had finally caught a Mud Sunfish, and thoughts of catching the Pinewoods Darter had all but left my mind.

I did want to catch this little Darter; the name was cool and the range of this species
was small, and I was sure nobody else had caught it, yet. The last spot I had planned for that day was a small tannic water stream in eastern North Carolina, not far from the Mud Sunfish hole.

As I approached the stream, I noticed that it would be perfect for snorkel fishing, the most effective way to catch Darters. The stream was healthy and clear and shallow enough to see in.

I quickly donned my mask and snorkel and got in, not needing a wetsuit for this warm August day. The rocky, debris-laden riffle was where I started, and I saw plenty of Darters, but not my Darter.

My partner thought of a great idea, she would release frozen but thawed out bloodworms into the current ahead of the riffle, and this would bring the Pinewoods Darter out from cover. We decided to do this in concert, and it sure worked, two Pinewoods Darters came out right in front of me. I quickly maneuvered my bait near the closest Pinewoods Darter and he bit!

I jumped up out of the water with the hooked Darter in my hand in a moment of celebration. I snapped some photos of the small but beautiful fish before releasing him.

It had been a great day with two North Carolina lifers! As I drove home with the setting sun in my face, I thought back to what Dustin had told me about catching the Mud Sunfish when I least expected it. This was just one of the times Dustin pointed something out to me that in fact came true later on, just as he predicted.