On my first trip to the Lumber River drainage in the Summer of 2016, I was targeting a few different
species of black water fish. I had read an article a week before about an older gentleman fisherman who had fished the canals around Fair Bluff, North Carolina for his entire life.

He was catching beautiful fish, some toothy, some with brilliant hues of blue and red. I was so interested that I drove the three hours east to Fair Bluff from my home in 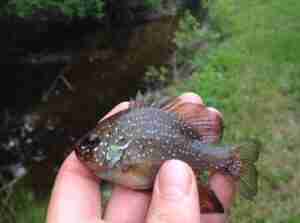 Charlotte, North Carolina. I was attempting to find the exact site that the old man had been fishing, but the only clue from the article was the town of Fair Bluff.

As I got closer to the small, one-stoplight town of Fair Bluff, North Carolina, I noticed a canal system that led directly into the town, on both sides of the road. I happened to stop at a crossroads before the town of Fair Bluff, and viola! There I was.

I had found the location from the article and I immediately got my gear ready. The canal goes into the town of Fair Bluff but also extended down the crossroad I was on and that area looked to be deeper and with darker water. I set out on foot and with rod in hand slowly began to make my way up and down the canal. I was having no luck whatsoever and I quickly became dismayed of lost hope, but that is when he arrived.

An old Chevy truck with rust on the sides pulled up next to me, it was the old man himself! I couldn’t believe my luck so far that day! The old man opened his tailgate and sat a few items down and get his gear ready. I asked him if he wouldn’t mind helping me out, since I didn’t really know what I was doing, and he said that would be fine. 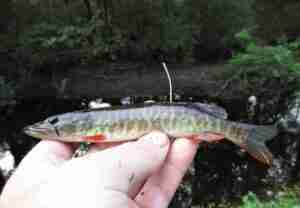 At first, I was a little apprehensive that they would work, but he assured me and showed me the rig he used for nearly every species of fish in the canals. He used a cane pole, A 13 footer, half the length of the rod for Line with a small, long shank panfish hook. The bait was no larger than 3/4 inch in size but was bright red And the movement it made in the black water made the fish go crazy.

It wasn’t long before I caught my first Bowfin (Amia calva). I was glad I was using a rod and reel instead of a cane pole because Bowfin can fight! I managed to get the fish up and take some roadside canal photos before release as I was anxious to get back to fishing. 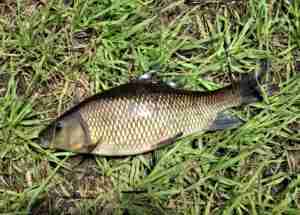 I caught two more Bowfin right afterward and the largest around 2 ½ pounds, not bad for an eight-foot-wide blackwater canal. The old man saw that I was catching Bowfin and urged that we move on down the canal more. I followed and we tried spots with heavy vegetation close to the banks of the canal.

Between the old man and I, we caught about twenty Redfins in under half an hour. I caught several species of Sunfish one after the other, the first being a beautiful Pumpkinseed (Lepomis gibbosus), and after that a Warmouth (Lepomis gulosus) and a Flier (Centrarchus macropterus). 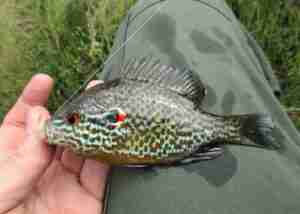 I was stoked, and more than happy with a wonderful day’s fishing trip. I wanted to thank the old man, but he wouldn’t accept any money from me, he simply smiled and drove away.

I spent the remainder of the next hour cast netting and dip netting the canal for other species. I caught a couple blue colored Golden Shiners (Notemigonus crysoleucas) that confounded me until Dustin pointed out a strongly decurved lateral line…I also caught a small Longnose Gar (Lepisosteus osseus), a couple of Eastern Creek Chubsuckers (Erimyzon oblongus) that were beautiful, and also a small Chain Pickerel (Esox niger).

It had been a great day and I thought of the old man as I drove home to Charlotte, maybe
one day I could be the old man helping someone else out, and that put things in perspective for me.

Fishing is so often not about catching the fish, but everything else that is involved in it. The good days come along just like the bad, and if we’re lucky, we will catch fish and learn something new.

Edward Johnson created The Art of Micro Fishing in 2019. The platform was created to provide a place for beginners and seasoned micro anglers to come together to learn and share. You can also join the group on Facebook.
Previous Welcome to The Art of Microfishing!
Next The Super Sunfish Grand Slam Part Three Mud Sunfish