The striking and elegant Blackbanded Sunfish was beginning to become my nemesis during the Summer of 2020. I had always found them easily in South Carolina with dip nets, but catching one hook and line in North Carolina, which was my goal, was looking bleak.

Out of the three species in the Genus Enneacanthus, the Blackbanded Sunfish was surely the toughest to get on the hook. Ranging from New Jersey to Central Florida, the BB Sunfish, as it is commonly known, only reaches a little over three inches in length.

I had kept this species for many years in aquariums, so I knew how shy they were. They tend to hide in small groups during the day, under half a foot of water or more among heavy vegetation. They would only come out in the daytime to feed on bloodworms which they loved.

I had tried night headlamp fishing for Blackbanded Sunfish, but they were very spooky and would not bite. We were successful with other species this way, such as the elusive Pirate Perch (Aphredoderus sayanus).

Daylight fishing for BB Sunfish is another thing altogether. They prefer areas with high amounts of cover, both over and underwater, such as lily pads and other floating vegetation. That is where we were always successful netting them, so micro fishing for them should be a breeze… right?

Over the years I watched as several anglers caught theirs. I had personally put this species on the backburner. I had made my mind up that it was something that I would have to devote a good amount of time to, and there were other species I could get locally in the meantime.

One of my best fishing friends from Canada, my friend Bradley, caught all three Enneacanthus species in one evening, and I was very happy for him. I had another friend from Florida that caught one in the Spring of 2020, and that was it for me. I was set on catching one.

So, this one late afternoon in October of 2020, I went out for the best BB Sunfish spot that I knew of. It was a pond in eastern North Carolina where I used to net them for my tanks. I got there around an hour before sunset and was already frustrated as I knew I only had about an hour to fish, as the park closed at dark.

I got my ten-footer and size 30 Owner Smallest hook and put on a small bit of red worm. Walking along the bank near the vegetation I went super slow this time. The sky was overcast, making it hard to see anything more than 2 inches deep in the black water. These are hard conditions to micro fish. 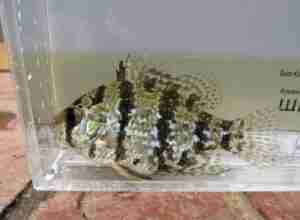 I kept going however, ignoring the swirls of Lined Topminnows on top of the water, dropping my bait carefully in and out of holes in the vegetation. Very methodical, very tiring work, but it was about to pay off.

I saw a hole a little further out that looked great, and I could barely reach it with my rod. I leaned in as far as I could and slowly placed the bait in the water letting it drop naturally. I saw the very slightest bit of movement two inches under where my bait was. Then I tried to locate my red worm.

I saw it, and in a flash, it was gone. I pulled up quickly and had my first Blackbanded Sunfish on hook and line! I immediately filled up my photo tank as the small fish was still hooked and I wanted to keep it alive. It was not a large one, but it was beautiful and I took several photos before releasing it back safely.

I may or may not have screamed out loud in the park a few times, alerting other anglers nearby to me, several kids came by and I showed them photos of what I had just caught, but they were more concerned about the large Eastern Banded Watersnake that was on the shoreline. 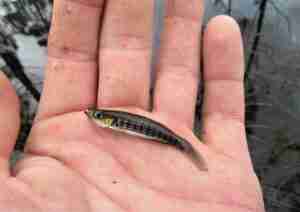 I caught a few Lined Topminnows after the BB Sunfish and called it a day, after all, it was almost nightfall. I was thrilled! I had finally caught a Blackbanded Sunfish on hook and line and also completed that Genus on hook and line.

Since then I have made what I call the Super Sunfish Grand Slam. It is for anglers and micro fishermen who catch all three Enneacanthus species on hook and line, plus the Mud Sunfish. If you qualify, you are recognized by the Art of Microfishing and your photos may be posted there as well.

Edward Johnson created The Art of Micro Fishing in 2019. The platform was created to provide a place for beginners and seasoned micro anglers to come together to learn and share. You can also join the group on Facebook.
Previous The Super Sunfish Grand Slam Part Two Banded Sunfish
Next Ditch Fishing For Micros In Belize