“Bait bucket” species are fish species that are used to catch larger fish and are commonly sold throughout North America. As a result, a lot of bait bucket species are released when the fishing is done into local waters where those species may or may not be native. This may lead to fish species reproducing outside of their native range and overpopulation issues, as well as increased competition with native species for territory. Below are some common bait bucket fish species used for live bait. 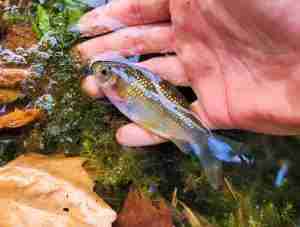 More commonly sold up north than in the south, Goldfish in common aquarium colors (orange, yellow, red) are great baits. Over time, reproducing survivors turn back to their natural colors (pictured). 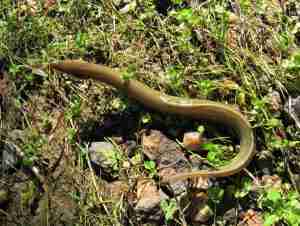 Sold in some bait shops in the south, and a shame, American Eels have one of the most interesting lives of all fish species. Snakelike and wiggly, American Eel do make great bait for gamefish such as Largemouth Bass (Micropterus salmoides). 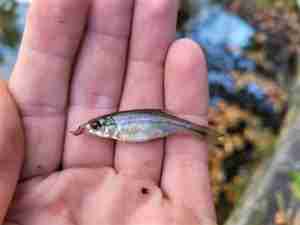 Another common minnow species sold for bait and unfortunately, released fish easily reproduce, even in stagnant streams. “Rosy reds” are simply Fathead Minnows dyed orange/red and are common in the aquarium trade. 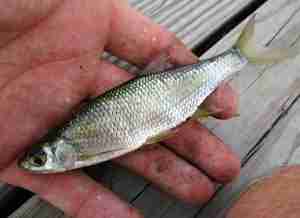 Likely the most common bait fish species sold in North America. Look for the strongly decurved lateral line and stout caudal peduncle as well as the golden colored profile. Golden Shiners reach up to a foot in length and are hardy on the hook. 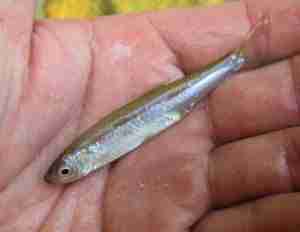 Another common minnow sold in bait shops, most notably in the north and surrounding the Great Lakes. Emerald Shiners are often abundant and are primarily a forage fish species for larger predatorial fish species. 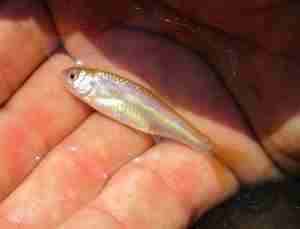 A wide-ranging bait bucket species, Red Shiners are striking fish in breeding dress and are very attractive to larger species. The Red Shiner pictured below was taken well outside of their native range in North Carolina and they were abundant there, outcompeting native minnow species. 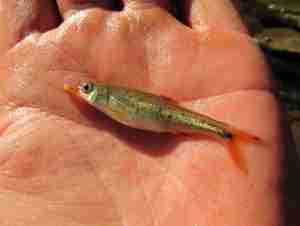 Sold in certain, southern bait shops, these make terrific, visible baits, although they are so beautiful in breeding dress, that most anglers don’t use them. Popular in the aquarium trade, Redlip Shiners normally turn bright red during feeding or when excited. 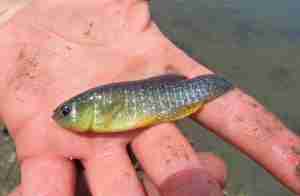 These are often sold erroneously as “mudminnows”, although Mummichogs are in reality part of the Topminnow Family (Fundulidae). Mummichog, unlike true Mudminnows, which are in the Pike Family (Esocidae), can look similar, but Mummichogs are much more available and abundant in shallow, coastal, tidal areas while the former occupies heavily vegetated areas in black water and tannic streams, ponds, and even ditches. 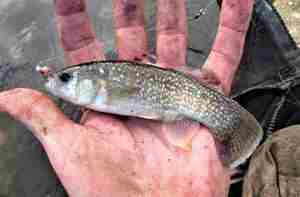 Commonly sold in the gulf coast as bait and very hardy, Gulf Killifish and Mummichogs are very similar looking and there may be some range overlap between the two species in Florida, however, Gulf Killifish are much more robust and grow noticeably larger. 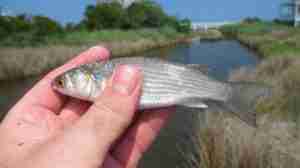 Hardy and a great bait for a variety of fish species, cut or live. Striped Mullet and the very similar but smaller White Mullet (Mugil curema) can easily be caught with cast nets or dip nets in shallow saltwater, tidal, and brackish environments. Striped Mullet have been known to travel far inland and live in freshwater as well and can survive low oxygen levels during periods of drought.

Edward Johnson created The Art of Micro Fishing in 2019. The platform was created to provide a place for beginners and seasoned micro anglers to come together to learn and share. You can also join the group on Facebook.
Previous Micro Fishing is the Art of Catching Very Small Fish
Next The Mighty Tangerine Darter!